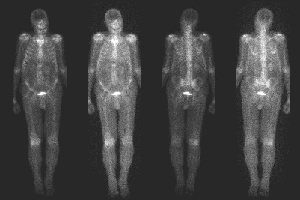 This is a picture of imaging modality


Nuclear medicine is an imaging modality that uses a radioactive tracer that is injected into a vein. Nuclear Medicine is different than other modalities where an external source of radiation is used; instead, the radiation is inside and is picked up by a camera on the outside.


The tracer that is injected is manufactured in a special lab and delivered to the hospital daily. The tracer undergoes radioactive decay immediately and is only useable for a specific amount of time. Once it is injected, the tracer follows a biological route to certain organs in the body depending on its chemical composition. After an injection, a certain amount of time is given to make sure that the optimal amount of tracer is taken up by the targeted organs and a minimal amount is left circulating in the blood. It is not uncommon to come in for the injection then return a couple hours later, or even the next day to take the pictures. At this time the patient lies on a table and the cameras are brought into position. The cameras detect the radioactive decay of the tracer in the patient's body and wait until they sense a required number of these disintegrations before they are ready for the next set of pictures. Most pictures take about 5 minutes to acquire, but with some total body pictures (such as the ones shown above) it can take up to 30 minutes to collect the information for one picture. After the exam, the patient is free to go and encouraged to drink lots of fluids to flush the tracer out of their system. Usually within a couple of days the tracer is diminished to a negligible amount. Some nuclear medicine exams require that you stop taking certain medications in advance so that they do not influence the biological route that the tracer follows.