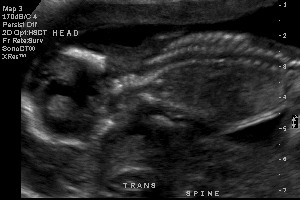 This a picture of a ultrasound imagine

Our facility has two ultrasound machines; one in the radiology department for general ultrasounds and one in the OB department for doctor use. Ultrasound exams are scheduled exams and generally last about 30 minutes. Some exams require that you fast and/or drink lots of fluids.